A first-time indie game exhibitor experience in a big expo.

I have done it, there is no going back now. Last weekend, we brought Rabbit Hole to show off at a convention for the first time: Anime Matsuri. Oh boy! I did not know what I was getting into.

As an indie developer with the first commercial project, It is difficult to know what to expect and what to prepare. There were so many little questions: what to bring? Where do I get those? How much to bring? What should you get from the guests? How to get traffic to your booth? Can I bring food? Is the table big enough? Can we setup extra chairs? How much should I spend? How about meals?  The list of questions just goes on and on.

This blog post is a way for me to reflect on the experience and share it with other fellow aspiring indie developers, or other creative individuals who want to share their works with the world. It is full of answers to the little things that you didn’t even know to ask. If you have never gone to an expo as an exhibitor, read on. Even if you are a seasoned exhibitor, I hope you will find something interesting and relatable. 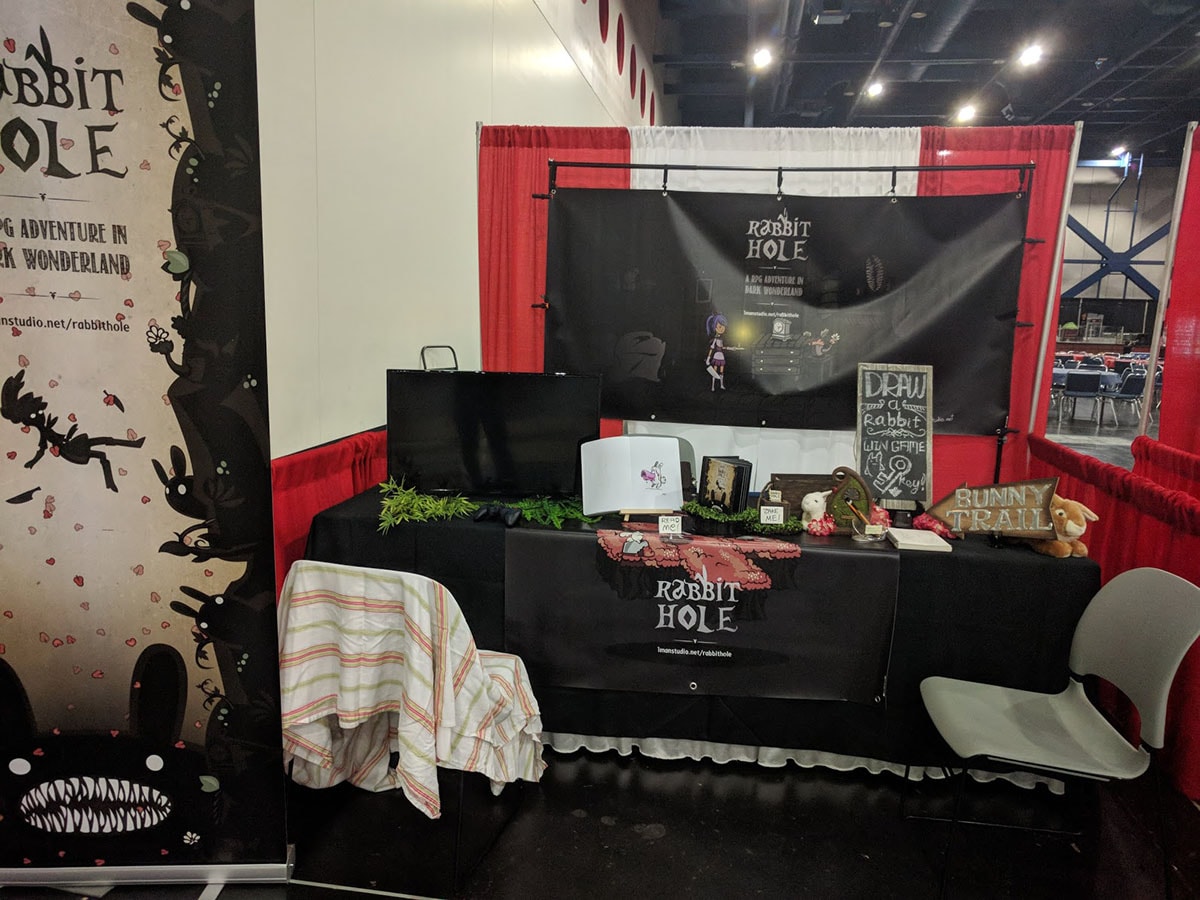 To prepare for the booth, I started off with our good old friend, Google search. I looked at dozen of articles, listened to a few GDC speeches, and scanned through hundred of booth photos from PAX and other gaming events. There are lot of advice, and you can spend thousands upon thousands of dollars on the booth trying to follow all that advice. Who am I kidding? an indie guy like me can’t afford that.

When you are not sure what to do, the best option is to pick a goal, pick a budget, and then optimize for those goals. Since Rabbit Hole is still in development, my goals are just to get email addresses and build up a list of potential players/fans for the game, and all with a budget that is less than $600 for the entire booth. Here is a list of things that I bought, and why:

Here is how the booth looks after we put everything together, the bunny girl not included: 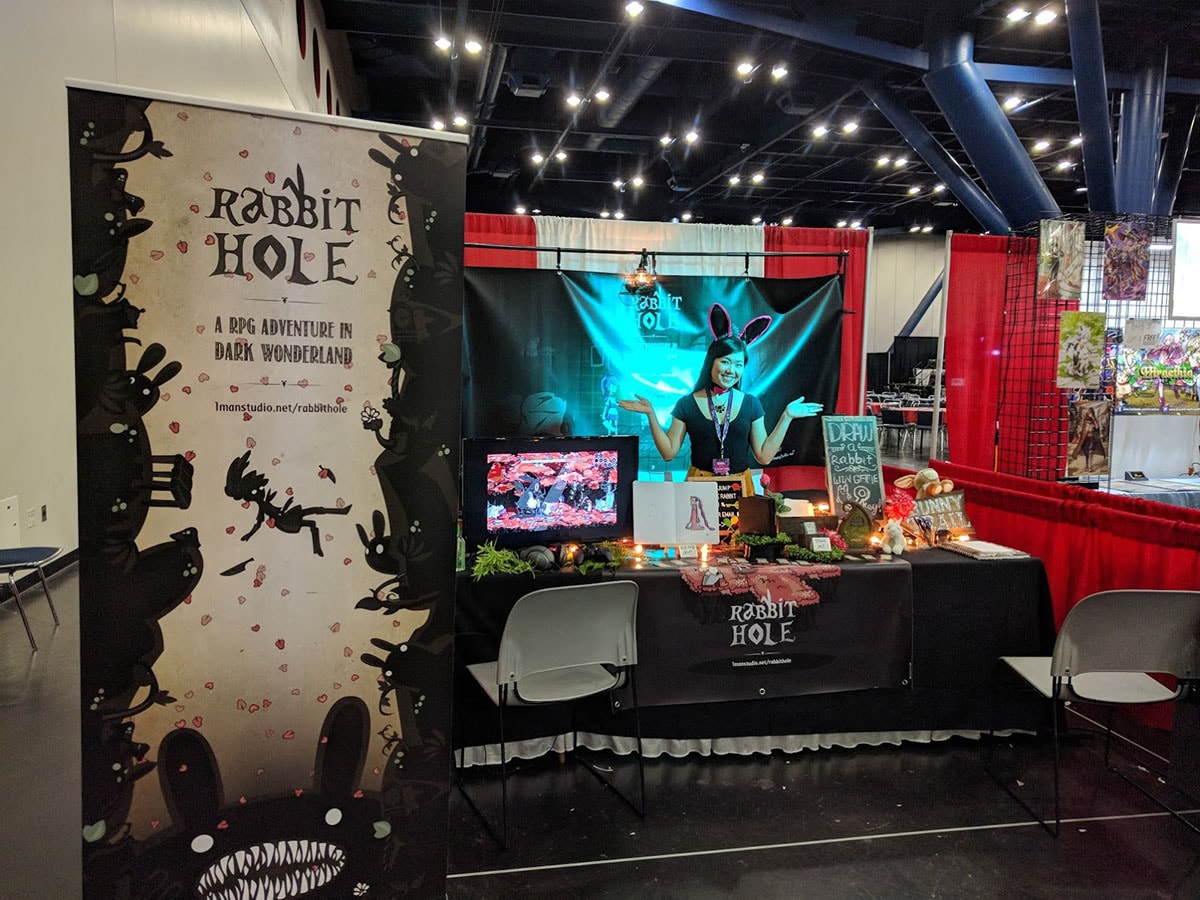 Not too shabby, and at around $550, the whole thing comes in a little bit under my targeted budget. The only thing that I would change is that I would have bought extra black linen to cover the whole booth. They are super inexpensive, and the red/white default color of the provided booth looks so weird.

Thank god for the scripts. If you are not a natural extrovert that becomes energized by talking to hundreds of strangers, you need a script. I’m glad that I put some time in before the event and thought about the script and it totally paid off. What is a script you may ask?

Simple. The script is the steps of events that you want your guests to go through to accomplish your goals. I’m very introvert, having a script helps so much because it makes everything repeatable and comfortable. My goal, as stated above, is to gather as many email addresses of potentials fans and players as possible. This was my script:

I improvised here and there but stuck with most of this script in every encounter. Even if you are a natural at talking to people and really good at improvising during conversations, you should still have an outline of steps that you want the guests to take.

This is even more important if you have other people helping run the booth. I found that by just telling my wife and sister to copy what I was doing, they were able to run the booth effectively without any additional directions at all. This is especially impressive since my wife is not a gamer and really doesn’t know anything about video games.

Things that did not go well

Things you need to know

So, was it worth it?

There were ups and downs, but it is totally worth it. The experience of running the actual booth is indispensable, and our email list grew by a whopping 350. I suspect some of the guests will unsubscribe later because people are just terrible at saying “No” face to face. However, we found some true fans and most of the list should remain intact. More importantly, I have a new story to tell, an experience to share, and a renewed motivation to complete the project.

Thank you for reading. If you are a creative individual who wants to show off your work to the world one day, I hope this blog was somewhat useful. Got any questions or comments, I can be reached at pretty much all these social media channels: Facebook, Twitter, Instagram, and Discord!